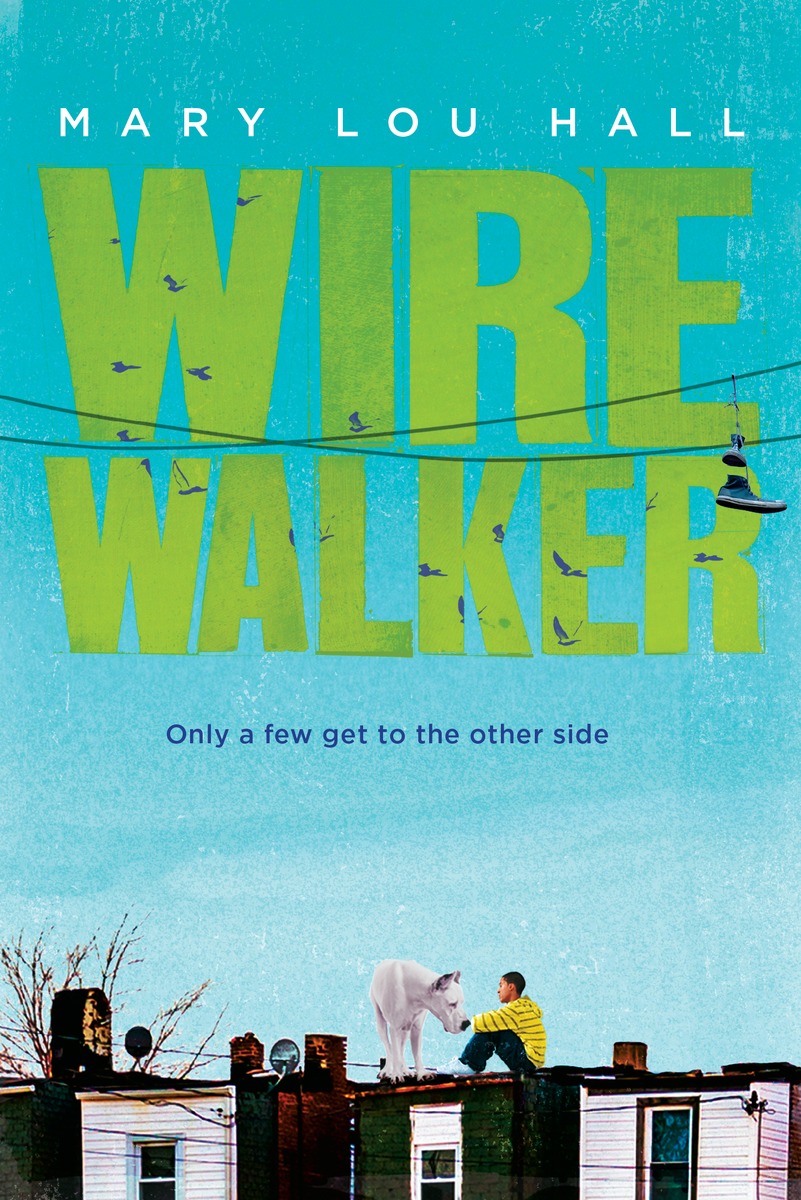 Mary Lou Hall‘s debut novel Wirewalker came out in September 2016, introducing YA readers to 14 year-old Clarence Feather, a boy with a big heart and some big problems. He earns pocket money running drugs while grieving his mother’s death and longing for another way to live. The story is beautifully written and hard to put down, and after reading it, I just had to interview Mary Lou for my blog.

But before we get to the interview, note the title of this post. It’s not “believe in your story,” but Believe your Story. Read on to get to the distinction Mary Lou makes.

And meanwhile, sign up for the book giveaway! I tracked Mary Lou down, got her signature on a hardcover, and am doing this giveaway through Goodreads. If you want to enter, check out the Goodreads Giveaways page. Free, no strings attached. Deadline: July 20, 2017.

A.B. Westrick: Welcome to my blog, Mary Lou! I really appreciate your taking time from your busy teaching schedule to tell me a bit about what inspired you to write this gripping YA drama.

Mary Lou Hall: Thanks for inviting me to your blog!

ABW: Let’s start with where Wirewalker came from. I’d love to hear what the spark was that lit your imagination and compelled you to write Clarence Feather’s story.

MLH: During late college and through graduate school, I waited tables and tended bar in a swanky, successful restaurant. While I was there, I became friends with a co-worker who was six years younger than I was. At that point in my life, the age gap seemed significant. He was barely old enough to legally work. To me, he seemed like the quintessential innocent kid encountering the so-called real world for the first time. I was wrong.

Over time, as I got to know him, he shared his story with me. In the neighborhood where he’d grown up, his brother still worked as a drug dealer. Drug money largely kept the household afloat, and when my friend was eleven years old, his brother initiated him into that world. My friend ran drugs for his brother for several years before leaving to wash dishes in the restaurant where I met him. About a year later, his brother joined us there, taking a job in the restaurant’s kitchen, leaving dealing behind “for good,” he claimed.

My friend openly admitted that he was sometimes still angry at his brother for using him as a runner, and I watched his brother take that anger on. He owned it. Most of the time, though, I watched them joke and laugh with each other, and my outsider’s perspective couldn’t reconcile what I was seeing. I wondered how a boy—and then a young man—could get past that kind of betrayal by a brother, who for all intents and purposes, had functioned as a father in his life. Their story—and my unreconciled questions about trust and forgiveness—stayed with me long after the restaurant closed and we finally parted ways.

See the giveaway details
at Goodreads.

ABW: So your characters are partially based on real-life acquaintances.

MLH: Yes, partially. Years later, I lived in a formerly thriving community that was falling into economic decline. Drug dealing was becoming a visible presence in the neighborhood, as were the boys who played their parts, like my friend in the restaurant, in those dealers’ success. These circumstances made me think about my friend and his older brother, about how the lines between love, loyalty, and survival might fall in different places for different people. Little by little, over a long period of time, Clarence Feather—and his conflicted relationship with the men who are raising him—came to life on the page.

ABW: That is really powerful. And I appreciate your saying that the novel emerged over a long period of time. I recall that way back in 2011, I was on staff at Richmond’s James River Writers when an early version of your manuscript won JRW’s Best Unpublished Novel Contest. Richmond Magazine published an excerpt in their July 2011 issue, and in a sidebar there, you said Clarence was eleven years old. Now he’s fourteen. Can you tell me a little about that change? Was it your idea or your editor’s, and how did the change affect your understanding of Clarence’s character?

MLH: The age-change suggestion came from my agent and from Ken Wright, the publisher at Viking Children’s Books, who acquired Wirewalker. They both rightfully wanted the story to reach as many readers as possible, and an eleven year-old protagonist would likely exclude older readers. I originally based Clarence’s age on how old my friend was when he started running drugs. I wanted Clarence to possess the vulnerability and tenderness of a child, but with wits enough to survive. After spending a week with two of my nephews who were fourteen at the time, I realized that I could be true to the Clarence I was writing and agree to the age change. My nephews were still very much boys—kids—and their dispositions, actions, and general way of being in the world synched up naturally with many of the ways I’d already drafted Clarence.

ABW: How much did the age-change affect the plot?

MLH: The characters of Clarence and Mona (and their friendship) came first, then the plot, and then the age change. The age-change didn’t really change the plot at all, in the end.

ABW: In Wirewalker the narrative flow is fabulous. Your language rolls and rolls, feeling seamless, effortless. Can you tell me about your writing process? How much do you write by hand (longhand) and how much on a computer? How do you achieve a flow? MLH: I think that what you’re calling flow starts to kick in, for me, when I really start believing the story I’m writing. Notice that I just wrote “believing the story” not “believing in the story.” Every writer wants to believe in their work, but for me, that belief has always seemed abstract and conceptual, like the popular self-help adage “Believe in Yourself.” I’ve never quite understood what that means in any concrete, practical terms.

But when we really believe something, that something becomes wholly real to us; it actually and unequivocally exists. I’ve found that my writing only flows when I start believing that my characters are real, when I find myself emotionally relating to them as if they are fully human and alive. I stuck with Clarence’s story—after writing two novels that I never sent out for representation—because early on in the writing process, Clarence became an actual walking, talking, feeling, dreaming boy to me and as I got to know him better, over time, his story quite literally flowed onto the page.

ABW: I love your comments about believing the story, and knew that had to be the title for this blog post. Thank you for the insight!

While reading Wirewalker I hit a few moments when Clarence’s situation reminded me of my own protagonist’s plight in Brotherhood. The settings are totally different—historical versus contemporary urban—but in both cases the boys join gangs where they’re pressured to do what they know is wrong. I found my bully character particularly hard to write, and I’m wondering what your experience was. Which characters came easiest on the page, and which did you struggle to craft?

MLH: Oddly enough, I didn’t really struggle with creating any of the characters. Once Clarence became real to me, the story started telling itself, for the most part, and all of the characters just seemed to show up and play their parts. There were, however, parts of the story that were emotionally difficult to write, when I hadn’t expected a particular thing to happen and then I suddenly realized that I had to write it.

The most potent example is the dogfight scene toward the beginning of the book. I knew that Clarence’s drug running would be played out against a backdrop of dog fighting, but I’d planned on it being implied rather than described. When I realized that the story needed Clarence to actually witness a dogfight, I literally wept, and I wept all the way through writing that scene. I’d already done my research on dogfighting, and while the actual “fight” part of that scene was brief, I had to viscerally imagine the details. As an avid animal lover and dog rescuer, the process was extremely painful. Thankfully, that was the only time in the story I had to directly touch that content.

ABW: The dogfighting scene was stomach-clenching material. It was very hard to read, and I was grateful you kept it brief. I’m not surprised to hear that it was hard to write.

Through how many revisions did you have to take this manuscript?

MLH: Talking about revisions takes me to the settings in which I write. I find that my writing process feels more intuitive and fluid if I work in different kinds of spaces at different times. For me, working on a laptop is essential. I sometimes write at home or in my office, but I often write in public places like coffee shops or cafes. The hum and energy of a shared public space bumps me out of my conscious (and often overcritical) mind and allows me to freely dream. In terms of a preferred mode of writing, working digitally allows me to seamlessly and continuously revise-as-I-go. This means that I move somewhat slowly through the first draft but have less revision to do once that draft is completed.

ABW: Nice. I wish I could say the same about my writing—that there’s less revision needed once a draft is complete! But no. Oh, well. Maybe with my next novel…

Thank you so much, Mary Lou, for sharing a bit about your process and for bringing Clarence Feathers’s story to life.

MLH: Thanks for asking, Anne!

ABW: I want to close by giving readers a few examples of your fabulous writing. There are so many places where the language is pitch-perfect that highlighting these few seems rather silly, but hey—here you go, readers. A taste. An hors d’oeuvre to whet your appetite. If you want to devour the main course, you’ll have to get your hands on Wirewalker:

“‘I’ll do it.’ The words flew out of his mouth on their own, and Clarence knew he’d spoken too quickly, too eagerly. He could feel himself smiling, exposing his teeth to the world. He had to bring the conversation down a notch, find some cool.”

“… he realized life was easier when he disappeared into corners, drifting silently through the house as if made of breath.”

“He knew that the question she’d asked was bigger than the words she’d used to ask it.”